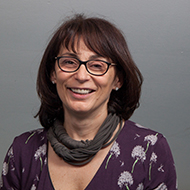 Antonietta Grasso
This user account status is Approved
About
Publications

Back to People
UX and Ethnography

She joined Naver Labs Europe in 1995 (previously XRCE until 2017), where she held previous positions as project leader and explorative research program manager. Her main research interests relate to user centred design of collaborative technology and while at the LABS, M. Antonietta has been involved in a number of international research collaborations, and industrial developments, where new concepts for ambient and intelligent interfaces have been explored. The result of this work has resulted in more than thirty patents and more than fifty peer reviewed publications.

Before 1995, Antonietta Grasso was research assistant at the University of Milan, where she participated in early projects within the CSCW area. Since that encounter with the CSCW field, her central interest has been around informing technology conception with user observations and in the interdisciplinary development of the corresponding technology.

Antonietta has a master's degree in Computer Science from the University of Milan, where she has been contract professor with the Faculty of Sociology for several years.

Publications since 1996 are in the database