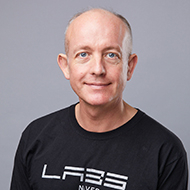 Christopher Dance
This user account status is Approved
About
Publications

Back to People
Management and Support
Research Fellow

Christopher is a research fellow at NAVER LABS Europe.

He joined Xerox in 1997 until 2017 where he first conducted research in mobile imaging, character recognition, user interfaces and heavy-tailed statistical processes. One of the first results of his research was a camera imaging application for documents commercialised as PageCam.

In 2002 he set up and led the Textual and Visual Pattern Analysis research area and coordinated the European Union project “Learning for Adaptable Visual Assistants”. Through this project he proposed and investigated the “bag-of-visual words” model for visual categorization, which has subsequently been of major importance in computer vision research. This technique has found applications as diverse as automatic image enhancement, document recognition, advertising, security and print controls.

Christopher was Laboratory Manager from 2004 to 2009, during which time he created the centre’s Machine Learning for Services research group.

Since 2009 he has conducted research on coupling machine learning with stochastic optimization and game theoretic methods for services, supply chains and transportation. Most recently, he has worked on methods for pricing on-street parking in the LA Express Park project and evaluations of the impact of changes in prices and time limits on arrivals, durations and occupancy associated with on-street parking.

Christopher received a BA (Physics and Theoretical Physics) and PhD (Information Engineering) from Cambridge University, England, where he worked on machine learning techniques for classifying quark jets and medical diagnosis, as well as geometrical techniques for reconstructing 3D models from multi-axial cross-sections. He has published over 30 refereed academic papers and has been granted over 40 patents.

4. Number of employees in under-represented gender in 10 highest salaries: 0/10 points

NAVER France targets (with respect to the 2022 index) are as follows:

This web site uses cookies for the site search, to display videos and for aggregate site analytics.

FunctionalThis website uses functional cookies which are required for the search function to work and to apply for jobs and internships.