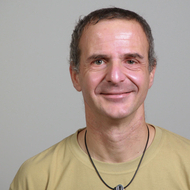 Jean-Marc Andreoli
This user account status is Approved
About
Publications

Back to People
Machine Learning and Optimization

I joined what was the Xerox Research Centre Europe in September 1993, and currently hold the position principal research scientist, Machine Learning and Optimization group.

In the past, I worked for two years with the IBM assembly plant in Montpellier, France, then for five years at the ECRC (European Computer Industry Research Centre) in Munich, Germany, first as a PhD student and then as a full employee. Between 1999 and 2005, I worked part time at the CNRS, as "Directeur de Recherche Associé" at the IML (Institut de Mathématiques de Luminy) in Marseille, France.