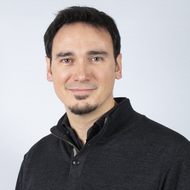 Gregory Rogez
This user account status is Approved
About
Publications

Back to People
Computer Vision

I am a Senior Research Scientist and the Head of the Computer Vision group. My research interests include computer vision and machine learning/deep learning, with a special focus on sensing and understanding people from visual data and the application of such technology to mobile apps and robotics. This include human detection and tracking, 2D/3D human pose estimation, 3D shape reconstruction, object manipulation and activity recognition in images and videos. In the past, I have worked on several other computer vision problems including egocentric computer vision, RGB-D vision, video-surveillance, biometrics and OCR.

I graduated from the École Nationale Supérieure de Physique de Marseille (now Centrale Marseille) in 2002 and received the M.Sc. degree in biomedical engineering and the Ph.D. degree in computer vision from the University of Zaragoza, Spain, in 2005 and 2012 respectively. I was a regular visiting student (2007-2008) and research fellow (2009-2010) in the Computer Vision group of Oxford Brookes University. My work on monocular human body pose analysis received the best Ph.D. thesis award from the Spanish Association on Pattern Recognition (AERFAI) for the period 2011-2013. I was then awarded a Marie Curie Fellowship to visit the University of California, Irvine between 2013 and 2015. After that, I was a Research Scientist with the LEAR/THOTH team at Inria Grenoble Rhône-Alpes (2015-2018) and joined Naver Labs Europe in 2019.