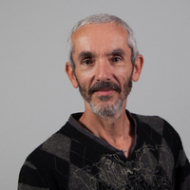 Back to People
Systemic AI

Jean-Yves Vion-Dury joined in 1995, working in partnership with INRIA Rhône-Alpes on research around programming tools and environment for distributed software components.

He studied the theory of formal languages, type systems, logic and process calculi and realized compilers for the CLF middleware language (Xerox) and for the OLAN distributed component platform (INRIA).
From year 1998 to 2002, Jean-Yves designed Circus-DTE, a programming language dedicated to data structure transformation. Following his 2 years sabbatical at INRIA (joining the WAM project in 2002), he developed a research line on XML technologies, especially XML validation, and studied formal properties of the XPath language through the COQ proof assistant. His current focus is on building practical and theoretical tools based on Semantic Web standards to address semantic interoperability and sustainability issues. Member of the program and steering committee of the ACM international symposium on Document Engineering, Jean-Yves authored 16 US patents and over 35 research papers. He also holds an engineering degree in Computer Science and a PhD from the Joseph Fourier University. Jean-Yves led the Xerox contribution for PERICLES, with a focus on modelling resource dependencies in evolving ecosystems.