“Contesting Borders and Intersections” was the theme of Designing Interactive Systems (DIS) 2019 attended by over 300 people. There were 107 papers out of 415 submissions so a 25% acceptance rate. The conference took place from 23rd to the 28th June in San Diego, California.

There were two opening keynotes given during the conference. One was a joint keynote of DIS and the C&C (Creativity and Cognition) conference which was co-located with DIS. It was given by Tiffany Shlain, filmmaker, author and founder of the Webby Awards and Ken Goldberg, an artist, roboticist and founder of UC Berkeley’s Art, Technology, and Culture Colloquium. The title of their keynote was “Screen Smashing: Iconoclasty in an Age of Illusionary Intelligence”. They discussed the evolution of boundaries between machines and people with time, technology and major world events. These boundaries have been continuously eroded by the World Wide Web, wireless networks, smartphones, and today by social media, fake news, claims about Artificial Intelligence and an impending “Singularity”. Ken brought up the analogy between robots and immigrants. He said that “Robots are today’s immigrants from the future”. He described our relationship with robots being in line with Colonial instincts, where we both fantasise and fear them. Their speech urged us as innovators to question the illusions of illusion by actively asserting the boundaries between ourselves and our machines.

The second keynote was given by Lisa Nakamura, a professor of American Culture at the University of Michigan and author of four books on race, gender, and digital media and gaming. The title of her keynote was “Virtual Reality and the Feeling of Virtue: Women of Color Narrators, Enforced Hospitality, and the Leveraging of Empathy”.  She examined the use of race in digital media specifically in Virtual Reality to create empathy. Virtual Reality has created a virtuous identity as the “empathy machine”. By simulating experiences of refugees, disabilities, homelessness etc, they market empathy for (white male) audiences. These real-life occurrences are reduced to objects where sensation is mimicked but the knowledge of others is not. VR privileges experience over empathy and feeling over listening. Through this keynote and subsequent discussions, the need to re-imagine empathy in digital media rather than to dismiss it was identified.

18 participants from both academic and industrial backgrounds in Design, Computer Science, Ethics, Environment, Medicine, Artist, Anthropologist, Data Science, Design, participated in the workshop of “Exploring, Defining, & Advancing Community-Driven Design for Social Impact”. It was facilitated by researchers and professors from UC San Diego.

During the workshop, we explored the questions of “What forms a community?”, “How to engage a community in the design process?”, and “What role should be exerted by a designer in community-driven projects?”. It led to insights that a community is an expert of its own context and solutions. We as designers, should be mindful to listen for their invitation before offering our help. Moreover, we can act as “facilitators” and “bridge-builders” but not as experts. 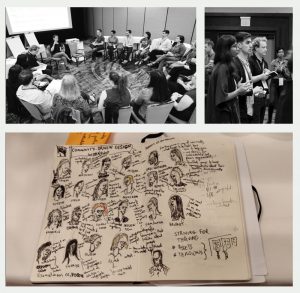 Photos from the workshop

During the art show organised by DIS and The Design Lab of UCSD, I had the opportunity to meet Donald Norman. He’s considered to be the father of the field of User Experience. We discussed the role of a designer in a community driven project and how to know if the community accepts you and your help. When I asked him about the future of HCI, he replied that we need to remove the ‘C’ and focus on Human-Interaction through all possible mediums. He also stressed we need to break barriers of disciplines in the present education system. For meaningful impact, the education structure should be based on problems rather than individual departments or disciplines.

The areas of focus of the papers and posters were Design Methods, Virtual Reality, Designing for Children and Marginalized communities, Well-Being, HRI etc. Some of the papers in these areas are mentioned below which are also relevant to the topics that we are working on in the UX and Ethnography team.

This paper presented by Bennett et al. aims to elevate the stories of design by people with disabilities and position them as central contributors to the design profession.

In particular, they draw from the counter-storytelling practices to build a corpus of stories that prioritize disabled people as contributors to professional design practice. Across a series of workshops with disabled activists, designers, and developers, they developed the concept of biographical prototypes: under-recognized first-person accounts of design materialized through prototyping practices.

That’s the Way Sighted People Do It”: What Blind Parents Can Teach Technology Designers About Co-Reading with Children

Strorer and Branham examine the practice of co-reading between people with visual impairments (PWVI) and their sighted kids. PWVIs’ perspectives offer unique insights into co-reading, as PWVI often read differently from their children, and (Braille) literacy holds particular cultural significance for PWVI. Their findings show that PWVI have valuable insights into co-reading, which could help technologies in this space to better meet the needs of parents and children, with and without disabilities.

Houben et al. present the outcomes of three workshops, exploring the personal experiences evoked by soundscapes of people in early to mid-stages of dementia. Using the dementia soundboard, they provide key insights into how sounds from everyday life triggered personal associations, memories of the past, emotional responses and the sharing of experiences. Furthermore, they identified several design considerations and practical insights for sound-based technologies in the context of dementia car such as having moments of silence in soundscapes.

In this paper, Snow et al. details the design and deployment of a situated IAQ display as a probe to explore ventilation and building operation practices when IAQ information is made available. Based on deployments in 11 naturally ventilated offices, they present an analysis of how reflection and sense making around IAQ can inform interactions with buildings. They suggested that displays that are locally situated, non-disruptive and visualise the effects of poor IAQ with human analogies may hold potential for engaging office occupants with IAQ.

Guerra et al. propose an alternative mode of interaction between nurses and clinical alarm systems to reduce alarm fatigue. They show how three concepts, developed to interact through the end user’s periphery of attention, can be applied in a clinical setting to improve the workflow of nurses and the wellbeing of patients.

Mediating Relatedness for Adolescents with ME: Reducing Isolation through Minimal Interactions with a Robot Avatar

Culen et al. discussed how a networked object in the form of a small robot designed to mediate experiences of care, social connectedness and intimacy, was used by adolescents with Myalgic Encephalomyelitis (ME), a condition that reduces their normal functioning, including the ability to socialize. A study with nine adolescents, each using the robot for about a year, revealed that it was largely effective at mediating their everyday experiences of relatedness, triggering productive new habits and social practices. They interpret these findings to propose a set of strategies for designing technologies that support relatedness while requiring minimal interactivity and engagement.

Morales et al. explored the human reactions to actual robot behaviors involving property damage or bodily harm. In this work, they conducted an in-person study with a real robot capable of inducing perceived property damage and personal harm. Participants observed a robot packing groceries and had opportunities to react to and assist the robot in multiple failure cases. Prior exposure to damage and threat failures decreased assistance rates from approximately 81% to 60%, with variations due to robot facial expressions and other factors.

A Survey of Users’ Expectations Towards On-body Companion Robots

Re-Embodiment and Co-Embodiment: Exploration of social presence for robots and conversational agents

See the World Through the Eyes of a Child: Learning from children’s cognitive maps for the design of child-targeted locative systems

Silva et al. provide a qualitative case study on children’s perceptions of urban landscapes. Their goal is to create digital maps in the context of locative systems and wayfinding for children. For this purpose, they engaged 70 students from the city of Funchal (Portugal) in the drawing of a cognitive map of their journey from home to school. Their work generated a set of 10 themes related to landmarks and design ideas for the creation of digital maps for children.

Should I Interrupt or Not?: Understanding Interruptions in Head-Mounted Display (HMD) Settings

George et al. address the missing understanding of interruptions in settings where there are people wearing an HMD (HMD user) and people not wearing one (bystander). They investigate (a) whether bystanders are capable of identifying when HMD users switch tasks by observing their gestures, and hence exploit opportune moments for interruptions, and (b) which strategies bystanders employ. They also identified interruption strategies of bystanders.

I presented the poster for our accepted Work-in-Progress paper “Supporting Natural Navigation for Running in Unknown Places” by myself and Jutta Willamowski and Danilo Gallo. We showcased our findings from the initial user tests conducted to validate our navigation prototype design idea. The work created quite a bit of interest among the attendees especially the likely target audience of runners. The concept was appreciated by all the visitors and most were keen to know when a commercial product would be launched. 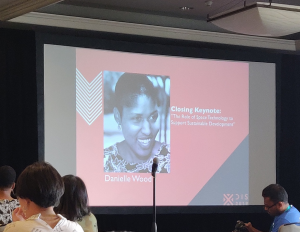 The closing keynote was given by Professor Danielle Wood who leads the new Space Enabled Research Group at the MIT Media Lab. Before becoming a professor, she held positions at NASA Headquarters, NASA Goddard Space Flight Center, the Aerospace Corporation, and the United Nations Office of Outer Space Affairs. During the talk, she discussed the role of space to spur innovation and development and gave examples of projects pursued by her group. Space Enabled sees opportunities to advance justice by increasing access to space technology to development leaders around the world and by applying space technology in support of Sustainable Development Goals, as curated by the United Nations. Their projects implement an integrated design process that includes techniques from engineering design, art, social science, complex systems modeling, satellite engineering and data science.

DIS was a truly interdisciplinary conference encompassing all issues related to the design and development of interactive systems. It was a unique platform where designers, artists, theorists, psychologists, user experience researchers, system engineers and many more came together to debate, shape and present the future interaction systems in research, design and practice.