Close
Back to Publications

We introduce a novel CNN-based approach for visual localization from a single RGB image that relies on densely matching a set of Objects-of-Interest (OOIs).

We introduce a novel CNN-based approach for visual localization from a single RGB image that relies on densely matching a set of Objects-of-Interest (OOIs). In this paper, we focus on planar objects which are highly descriptive in an environment, such as paintings in museums or logos and storefronts in malls or airports. For each OOI, we define a reference image for which 3D world coordinates are available. Given a query image, our CNN model detects the OOIs, segments them and finds a dense set of 2D-2D matches between each detected OOI and its corresponding reference image. Given these 2D-2D matches, together with the 3D world coordinates of each reference image, we obtain a set of 2D-3D matches from which solving a Perspective-n-Point problem gives a pose estimate. We show that 2D-3D matches for reference images, as well as OOI annotations can be obtained for all training images from a single instance annotation per OOI by leveraging Structure-from-Motion reconstruction. We introduce a novel synthetic dataset, Virtual Gallery, which targets challenges such as varying lighting conditions and different occlusion levels. Our results show that our method achieves high precision and is robust to these challenges. We also experiment using the Baidu localization dataset captured in a shopping mall. Our approach is the first deep regressionbased method to scale to such a larger environment. 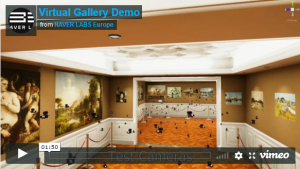