France, an internationally applauded leader for its artificial intelligence skills but, to a lesser extent for, its AI industry or technology, has just announced its national AI strategy.

France will invest €1.5B over the next five years in four related parts: Building a Data Focused Economic Policy, Promoting Agile and Enabling Research, Assessing the Effects of AI, AI working for a more Ecological Economy, Ethical Considerations of AI and Inclusive and Diverse AI.

Within the line of Promoting Agile and Enabling Research, the setting up of an ‘emblematic network of four or five dedicated institutes, anchored in university’ was announced. PRAIRIE is the first of these institutes led by INRIA. The Institute will be located in Paris and we’d expect Grenoble to follow as another site due its concentration and vibrant ecosystem of research, academia and industry a huge part of which is in AI.

I was at the summit in Paris last Thursday, March 29th, where President Emmanuel Macron himself presented the five-year strategy, the result of a mission he had given to Deputy Cédric Villani last September. Villani is France’s star mathematician who received the Fields Medal in 2010 and has been a member of parliament since 2017.

How Villani researched his report and the document itself are available on the AI for Humanity site, the brand name chosen for the strategy. 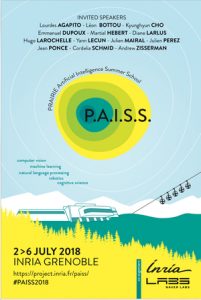 NAVER LABS is the largest industrial research lab in AI in France with 70 research scientists in the domain (machine learning and optimization, computer vision, natural language processing, data & process modelling) and it’s growing. The LABS are just a stone’s throw away from INRIA Alpes and France’s 3rd largest university, Université Grenoble Alpes (UGA) We’ve been collaborating with both of these institutes for many years. With INRIA as the lead for PRAIRIE we were approached early on to be a founding member of the Institute and naturally confirmed our interest.  In anticipation of PRAIRIE with INRIA  we began to co-organize the 1st International Summer School for Artificial Intelligence of the PRAIRIE Institute called PAISS (PRAIRIE Artificial Intelligence Summer School) which will take place at INRIA Grenoble from July 2 – 6 with a main event at NAVER LABS Europe.

Aside from the Summer School we’ll be working on how else we’ll be contributing to PRAIRIE in the weeks to come. We’ve been teaching for a long time and will continue to do so as part of AI training. We only recently completed classes in natural language processing and deep learning at CentraleSupélec and big data in computer vision at ENSIMAG (with INRIA). More recently we started to give seminars to the Station F community, the words largest start-up campus in Paris. NAVER was the first member of Station F in 2017 and has more than 80 seats at Space Green. It currently hosts more than a dozen start-ups in consumer internet services and consumer experience enabling services. LABS and Space Green work closely on a number of projects and our Station F meet up seminars are available for everyone online. Also, on the start-up scene NAVER invested €200M in France’s Korelya Capital K-Fund whose focus is on investing in AI start-ups. Overall, a pretty serious investment by NAVER in France and French AI.

Another way we’ll be contributing to the AI community is open data. Whenever we have the opportunity we’ll make available datasets like the popular Virtual KITTI and Procedural Human Action Videos (PHAV) dataset in computer vision.

NAVER also just held its annual AI colloquium in Seoul, Korea on March 30th. If you visit the link and scroll down, the essential parts of the program are in English so you can see what we’re up to over the different tracks stretching from voice and dialog to recommendation and mobility. You’ll understand how AI is core to just about everything we do.

So, it’s exciting to be at NAVER LABS, exciting to be in France and in Europe. Next up is the European Union’s AI strategy scheduled for April 25th so stay tuned!

You might also want to read the interview Emmanuel Macron gave after the summit to Wired magazine. It’s not so often a national leader can hold that level of conversation on AI.