Neural Machine Translation (NMT), based on Deep Neural Networks, has been deployed in many commercial MT engines such as Google Translate, Bing Translator, DeepL and Naver’s own Papago.

It’s behind a lot of progress in the quality of machine translation which, in some language pairs, is now almost as good as human translations.

Yet, NMT isn’t perfect and there are a couple of inherent reasons for this which include, but that are not limited, to the following:

In this post, we discuss the problem of brittleness which is what we addressed in the WMT challenge. You can read the full paper here.

The competition takes part in the context of the yearly WMT conference. Participants are given a number of resources (translated texts and monolingual data) to train their models.

The goal was to make French-English and Japanese-English Machine Translation systems that are good at translating user generated content (UGC) from social media (specifically Reddit).

We could use large public translated corpora (e.g., Europarl, CommonCrawl, etc.), as well as a smaller domain-specific corpus called “MTNT” ( that contained sentences from Reddit that had been translated by humans). The evaluation data was a subset of the MTNT corpus.

The kind of user generated content that Reddit and similar websites aggregate often contains orthographic variations that are particularly tough for regular MT systems. Here are some (cherry-picked) examples from MTNT that illustrate this:

Any if the above will typically cause problems for any standard MT system. For instance, while capitalization may seem trivial, NMT considers the ‘same’ words capitalized differently as 2 different words. If “SERIOUSLY” is not in the training data, a regular NMT system will not be able to translate it (even though “seriously” is a very frequent word). Typos and Internet slang are also a large source of confusion because they’re typically missing from public corpora. For instance, the word “bcp”, which is a very common abbreviation of “beaucoup” (“very” in French) is often mistranslated by state-of-the-art models and commercial MT engines.

Our team proposes several solutions to mitigate these problems, which we can roughly categorize into three types of techniques: corpus filtering, domain adaptation and robustness tricks.

We observed that MT models trained on given data were particularly brittle and often generated hallucinations (output completely unrelated to input) or copies (exact copy of the source). We traced these problems to the bad quality of some of the training corpora (in particular CommonCrawl), and were able to completely offset them thanks to three filtering steps:

After the filtering we applied several robustness tricks:

<T> tokens mean that the previous word is in title case, while <U> means upper case. The model treats these special tokens like any other word. We also use the standard Byte Pair Encoding (BPE) algorithm to split rare words into more frequent “subwords” (i.e., “tasty <U>” → “ta <U> sty <U>”).

Finally, because the evaluation data is in a specific domain (Reddit), and we have a small training corpus of the same domain (MTNT), it makes sense to apply the usual domain adaptation techniques.

With these pre-processing steps, we train Transformer Big models using the Fairseq framework, and similar hyper-parameters similar to the winner of the WMT18 EN-DE News translation task [paper].

The organizers performed automatic and manual evaluation. The automatic evaluation was done with the standard BLEU metric which compares a model’s outputs with a human-translated reference. The human evaluation was done by asking human judges to score model outputs on a scale of 1 to 100, while being shown the source sentence. The main results are shown below and you can check out the full task overview paper if you want more detail. 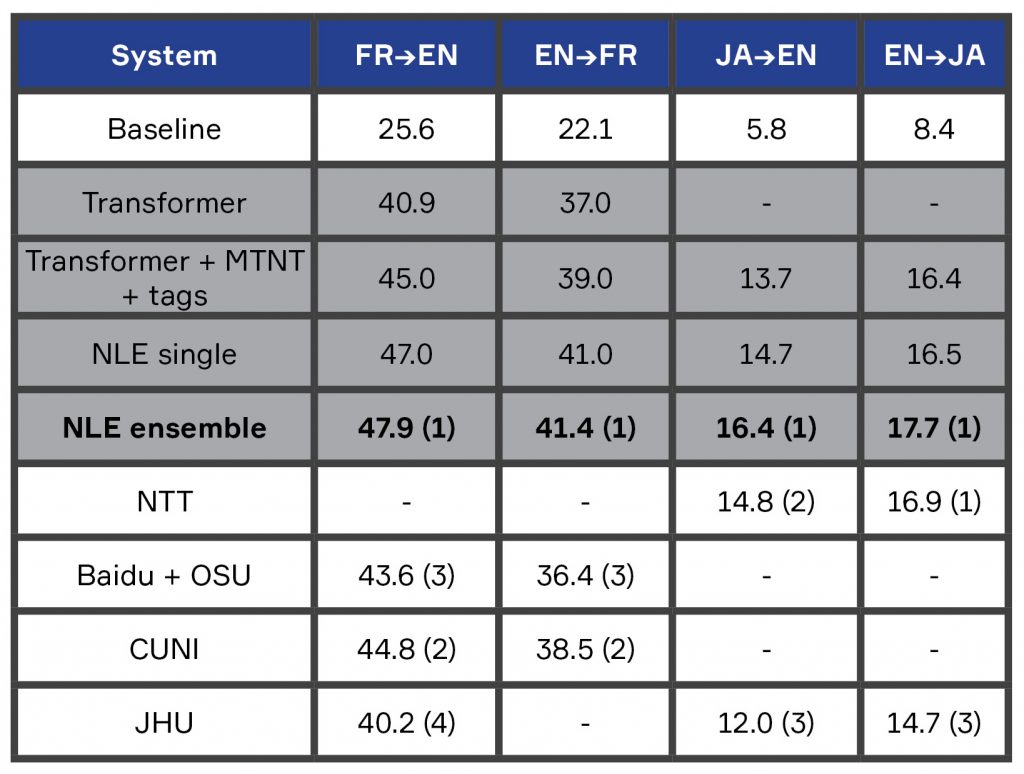 The best improvements were obtained with the domain adaptation techniques. Back-translation and ensembling improved the scores a little more. Our ensemble models (which combine all the techniques mentioned) ranked first in all translation directions with a large margin on FR-EN and a tight margin on JA-EN.

We see that our ensemble model ranked first in 3 out of 4 sub-tasks. Our English to Japanese model, which has the highest BLEU score, gets second position in the human evaluation.

71-90: Very good translation, only a couple of minor mistakes

Good baseline systems, with corpus filtering steps, domain adaptation and back-translation were really the key elements in what we did. To solve a couple of the robustness issues we proposed some tricks (e.g. handling of emojis and capital letters), but this had little impact on BLEU scores partly due to the rarity of these issues in naturally occurring text. For instance, the particularly “noisy” MTNT test set only contains 5 emojis out of 20k words.

In the future, we’ll be focusing more on robustness and less on domain adaptation. We’ll explore more aggressive alternatives to our natural noise generation (e.g. adversarial noise generation) and look for more specialized evaluation metrics than BLEU for robustness.

About the author: Alexandre Berard is a research scientist in the Natural Language Processing group. He worked with Ioan Calapodescu and Claude Roux on the WMT19 Robustness Task.
The results of the WMT challenge are presented at the 4th Conference on Machine Translation, 1–2 August 2019 which is being held in conjunction with ACL19 in Florence, Italy.