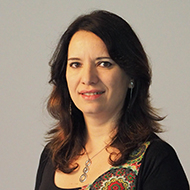 Stéfania Castellani
This user account status is Approved
About
Publications

Back to People
UX and Ethnography

Before joining what was formerly the Xerox Research Centre Europe in 1995 in the Coordination Technology group, I was involved in research activities on coordination models and languages at the University of Bologna, in Italy, which is also my native country.

I received a laurea degree in Computer Science from the University of Pisa in 1993.

Main projects and activities I have been involved in