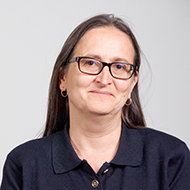 Back to People
3D Vision

Graduated from the Faculty of Mathematics and Computer Science of the University of Timisoara, Rumania (1991), I obtained the Master of Robotics and Vision (1992) and her Ph.D. degree (1996) in Computer Science (Science of engineering) from the University of Nice - Sophia Antipolis, France. My PhD thesis prepared within the group Robotvis, at INRIA, Sophia Antipolis studies the possibility of a projective representation of the three-dimensional environment using a pair of views obtained with uncalibrated cameras.

I spent two years (1996 - 1998) as a postdoctoral associate within the groups Movi, INRIA Rhône-Alpes and Vista, IRISA Rennes where my research work focused on self-calibration and reconstruction from stereo image sequences and motion analyses of video sequences.

Between 1998-1999 I was research and teaching assistant at CUI, University of Geneva, where within the Computer Vision Group, I was mainly involved in research on watermarking digital images and videos for copyright protection. I followed my research work on watermarking technologies as a research engineer in the Image and Video group of the Multimedia Communications Department, at Institut Eurécom (2000-2001).

Between 2001-2017 at Xerox Research Centre Europe my main research interests were image understanding, multi-modal information retrieval and domain adaptation. I am co-inventor of 25 Issued and further 12 Filed US Patent Applications and a few Patents filed in Europe. I got the Anne Mulcahy award and was nominated for the Maria Petrou Prize in 2016.

For more details see my profile on researchgate.